Uncovering the Truth About Dinosaurs

Uncovering the Truth about Dinosaurs offers compelling evidence about these mysterious creatures that confirms the biblical account of Genesis. Witness the awesome work of the Creator and see how the Bible gets it right in all matters -- including dinosaurs.

Interviews with experts reveal intriguing information about favorite dinosaurs like T. rex and Triceratops, while host Markus Lloyd explores a fossil dig where paleontologists work to unravel the mysteries hidden in dinosaur bones.

From legends and folklore to archaeology, eyewitness accounts, and the Bible itself, experts describe compelling evidence from around the world that suggests dragons were dinosaurs that lived in the not-so-distant past.

Episode 3: Dinosaurs and the Flood

Modern paleontologists are piecing together a fascinating chronicle of the lives and catastrophic end of the dinosaurs. Fossil and geological records divulge evidence that matches the biblical description of one truly unparalleled cataclysmic event -- the Genesis Flood.

Thanks to technological advances, more ground-breaking discoveries are coming to light every year, validating the argument that dinosaurs were created and lived at the same time as humans just thousands of years ago.

If you prefer, this resource, Uncovering the Truth About Dinosaurs, is also available in high definition digital form and can be downloaded now.

This is an excellent, high-quality set of DVDs covering the subject of dinosaurs and how they fit into a Biblical world view. The series does a great job showing that when the evidence is properly understood, dinosaurs are a friend to the Bible and a Biblical timeline, NOT the friend to evolution as the secular world tries to make everyone believe. Their format of 22-minute segments is perfect for Sunday School and other group presentations allowing good time for discussion after each session.

Was shocked to find that the material on this "DVD Set" that contains 4 dvds, could have been fit on just 1 dvd. Seriously, each one is only about 25 minutes long. The info presented is good but the cost for content is misleading and overpriced. WHY ICR? We were looking for something a little more substantive and deeper academically speaking. It's good for young kids (4-9) but you can probably find this material more responsibly presented/packaged in a number of other resources.

My 6 year old daughter and 13 year old cousin were both riveted. There are excellent graphics to hold the attention of young minds while the narrator challenges the assumed world-view that millions of years of evolution, death, and survival-of-the-fittest preceded the first man and woman capable of moral sin. My daughter’s favorite part is the computer animated "long neck" struggling to stay afoot as flood waters rise and it plods slowly in pursuit of higher ground (leaving foot prints in the rock layers which we can uncover today). My 13 year-old (boy) cousin immediately jumped on his phone to call his dad and inform him that Dinosaur bones are not completely fossilized but contain collagen proteins (organic bonds do not last even 1 million years let alone 65 million years). There are many rapid facts he will enjoy repeating.

Protein and blood cells in dinosaur bones? No ancestors for the dinosaurs? A stegosaurus depicted on the wall of a Cambodian Temple and a long neck dinosaur among the drawings left on a cave wall by an American Indian group? Yes. This DVD set produced by the Institute for Creation Research is masterfully done ( as are all its productions). The sciences of biology, geology, paleontology, and archaeology, as well as history and the Bible are used to show that the Bible is accurate about its depiction of Noah's Flood, a word-wide catastrophe. Scientists from a number of disciplines are interviewed including one scientist who digs dinosaurs for a living.

Those who are interested in dinosaurs as I am, will find many interesting facts uncovered here that we normally do not hear about. I found particularly interesting the story told by dinosaur track ways found in North America that tell of these animals struggling to escape the rising Flood waters.

In the DVD about dragons and dinosaurs, I found it interesting to see some familiar faces of dinosaurs among the dragons. I believe one was the velociraptor. The argument on this DVD makes it credible that people in history actually did see dinosaurs even though they called them dragons. The name dinosaur was not coined until the 19th century.

This 4-DVD set gives glory to God as the creator who created different sorts of dinosaurs for his pleasure. Some of the design features in these animals are very unique. I will want to watch this DVD set many times over.

As a science teacher in a public school I will be using this as a resource to bring interesting science to my students. I can say also that all science rightly understood will help lead our young people to God. ( I don't include as science the atheistic philosophy of evolution which has absolutely no scientific bases and which has left our young people without meaning and without hope.) We read in Romans Chapter 1 that the visible things that can be understood will teach us of the attributes of God including his eternal godhead. For sure our children need to know this great God given the perilous world that they live in. Our children need to know that they have value and that there is hope.

Two other very valuable DVD packages from ICR that I would highly recommend are Made in His Image and Unlocking the Mysteries of Genesis. These also give glory to God and are full of very good science. 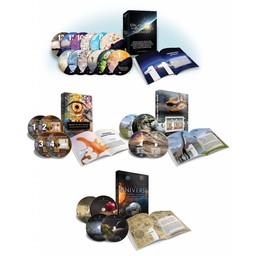 Uncovering the Truth About Dinosaurs